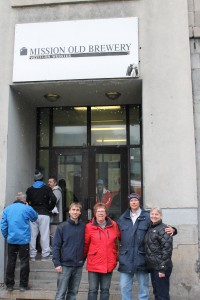 On Friday, March 13th, members of several IAMAW local lodges gathered together at the Old Brewery Mission in order to show support for this Montreal Institution.  Members received a guided tour of the facility which included how the facility operated, the amount of people who used the facility, the rules and other information. 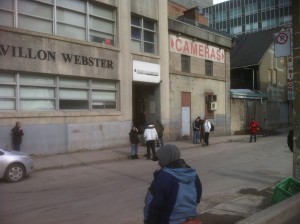 The less privileged of Montreal begin to gather for their late afternoon meal.

Following the tour, it was time to get to work: lodge members donned their aprons and began setting up the tables: this included napkins, cutlery, bread, coffee and two Oreo cookies.  Everything regarding the service is about efficiency: chains of volunteers link the kitchen counter where the meals are issued to the farthest tables.  The coffee was premixed with milk, and as each recipient finished their meal, their tray was picked up and the area was cleaned for the next wave of hungry diners. 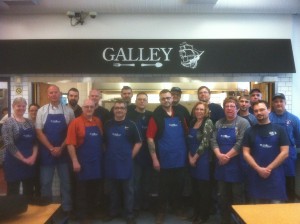 The IAMAW District 11 team of volunteers at the Old Brewery Mission dining area.

Teamwork is essential in order to serve up to several hundred less fortunate people who may be homeless, poor and perhaps on welfare.  There was no need for any special “programs” involving catch phrases, meetings and discussions.  This system obviously evolved through trial and error, and is easily learned by all new volunteers.

During the period between  16:00 to 18:00, we served approximately 200 people.  As they made their way into the dining area, one could not help but wonder how these less fortunate people reached their current situation.  Speaking to a long-time volunteer, I was told that the range of circumstances was very broad: some had university educations and once held government jobs, others lost their wives/husbands and/or children, still others had substance issues.  Looking at their faces as they shuffled by, it was apparent that misfortune can happen to anyone. 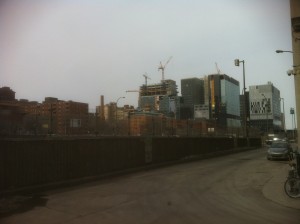 In stark contrast to the reality of the less fortunate, nearby construction of multi-million dollar buildings continues.

The latest official census on homeless people was done in 1998; the amount of homeless in Montreal at that point was a staggering 20 to 30 000.  A more recent census was conducted in March of this year, but the numbers are not yet in. 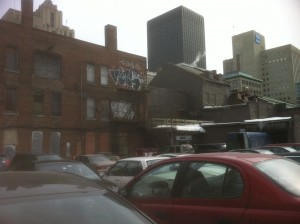 Nearby buildings on Clark street.

The Old Brewery Mission and the IAMAW have a very interesting shared historical fact: both organisations turn 125 years old this year!  As a gesture of gratitude for the tireless work performed by this organisation, the IAMAW District 11 presented a cheque of $1 500 to the Old Brewery Mission.  I hope to continue our relationship with this iconic Montreal institution for as long as they need volunteers.  The obvious hope is that this will not be a long-term relationship, but today’s reality almost certainly indicates otherwise…